A Living Memorial for Deadened Memories

The Bus, a sculptural memorial in honour of Ken Saro-Wiwa, Saturday Dobee, Nordu Eawo, Daniel Gbooko, Paul Levera, Felix Nuate, Baribor Bera, Barinem Kiobel, and John Kpuine was shipped to Nigeria from the United Kingdom by Platform. On arrival in Nigeria it was seized by the Nigeria Customs since 8th September 2015 on the reported grounds that it had “political value.” The original idea was for the Bus to be used during the 20th anniversary activities to mark the dastardly execution of the Ogoni 9 on 10th November 2015. The kidnap of the Bus by the Nigeria Customs, as Celestine Akpobari, head of Ogoni Solidarity Forum (OSF) labels it, made it impossible for the cultural memorial to be used.

One interesting fact that emerged from the hearing of 4th February was that the Customs officials stated that the the “inscription on memorial bus is a threat to national peace.”

Due to the continued detention of the sculpture by the Nigeria Customs, the OSF leader petitioned the House of Representatives of Nigeria seeking their intervention for the release of the sculpture. We note that the sculpture was created by Nigerian-born artist Sokari Douglas Camp.
The House of Representatives has so far held two hearings on the matter on 28th January and 4th February 2016. At the first hearing the Representatives were unhappy that the Comptroller of Customs did not appear before them. Again, at the second hearing the Customs boss was conspicuously missing, prompting the Representatives warning that they should not be provoked to issue an arrest warrant against the big man. The next hearing is scheduled for 17 February 2016.
One interesting fact that emerged from the hearing of 4th February was that the Customs officers stated that the the ‘inscription on memorial bus is a threat to national peace.”
What could possibly be the threatening inscription on the sculpture? The Bus has the name of Ken Saro-Wiwa on a white steel banner on one side, and the names of the other 8 Ogoni leaders on sculptural crude oil barrels. It also has the words of Ken Saro-Wiwa: “I accuse the oil companies of practising Genocide against the Ogoni.” Would these threaten national peace?
It should be noted that this sculpture has been on display in the UK for 9 years and was shipped to Nigeria by Platform on the request of network partners in Nigeria: Movement For The Survival Of Ogoni People (MOSOP), Ogoni Solidarity Forum (OSF), Social Action, Health Of Mother Earth Foundation (HOMEF) and Environmental Rights Action/Friends of the Earth Nigeria (ERA/FoEN).
In his official submission to the House of Representatives, Akpobari said, “We are concerned that after killing Ken Saro-Wiwa and the Ogoni 8, and dumping their bodies in an unmarked grave, the Nigerian government is bent on erasing every memory of Saro-Wiwa and his struggles for justice, including making sure that a “Living Memorial” – the Bus made in his memory and in solidarity with his people – is never delivered to them.”
The Nigeria Customs appears to have chosen to fight a battle to erase the memories of these heroes of environmental and cultural struggles. Seizing a sculpture gives the impression that the State is attempting to kill the message after annihilating the messengers. With the experience of history, we can say that this is a futile endeavor and the Customs should release and deliver the Bus to the people of Ogoni as emblematic representatives of peoples struggling for ecological sanity, social inclusion and dignity.
If there are persons that wonder who Ken Saro-Wiwa and these leaders were, the words of Sanya Osha in a paper published in Socialism and Democracy gives a crisp picture:
“When Ken Saro-Wiwa and his nine Ogoni compatriots were hanged in November 1995, it both polarized and unified the fragile as well as volatile geographical entity known as Nigeria. However, this time, it wasn’t the ethnic and religious fissures that were most noticeable. Instead it was the naked fist of raw power versus the vociferous protestations of a disenfranchised minority writhing beneath the weight of a seemingly implacable military dictatorship.
“Ken Saro-Wiwa became the voice, face and symbol of this aggrieved minority straining for denied civic and democratic rights. He became a hero in patently unheroic times and this is what makes his life and the loss of it so potently poignant.” 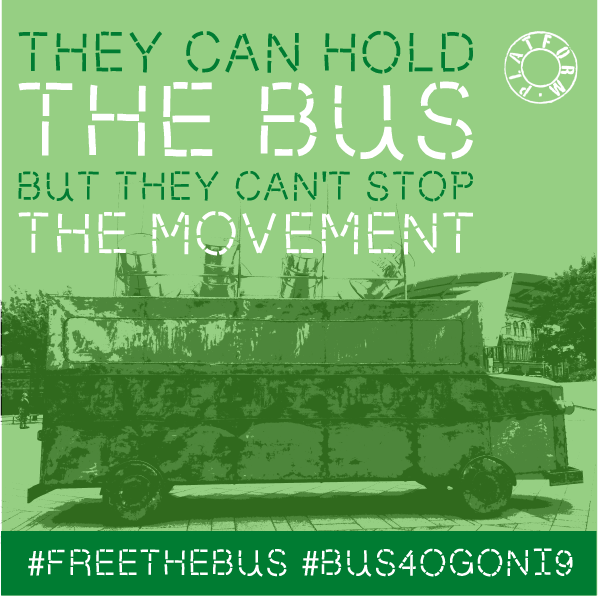 It is for this and other reasons that 10th November has galvanized a global environmental justice movement and has become a global day of remembrance of victims of extractivism. And as Platform warns, They can hold the Bus but they can’t stop the movement.
There is no wisdom in keeping this sculptural Bus in captivity.