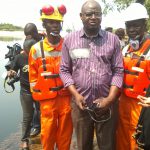 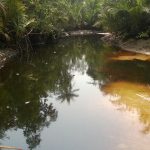 14th February was celebrated as Lover’s day across the world, but in parts of the creeks of the Niger Delta it turned out to be a tragic day. While lovers dressed with a touch of red, Forcados communities were braced for the unknown with the threat of having their water ways coated with crude oil rose by the hour. On that day, Shell Petroleum Development Company (SPDC or Shell) announced that there was an oil spill from their 1.2 metres (48 inches) export line and that they were investigating the cause. The point of leak lies under 4.5 metres of water.
To be sure that the right thing was done, that the environment was protected and that communities were not left in limbo, the Minister of Environment, Amina Mohammed and the Minister of State for Environment, IBRAHIM Usman JIBRIL, visited the Forcados Terminal on 19th February to see things for themselves. They forsook the luxury of getting there on a chopper and took to the boats to get there through the choppy, and at times, treacherous waves. Their move sent a strong signal that the business of ecological defense in these parts was taking a necessary curve.
We should also say here that since taking office, these ministers have toured the environmental crisis hot-spots in Nigeria – including those polluted by oil and industrial activities, those impacted by desertification and loss of wetlands and those facing the menace of gully erosion. They have also been in constant consultations to ensure that the implementation of the UNEP report on Ogoni environment is not only implemented but that other parts of the Niger Delta would not be left on the lurch. 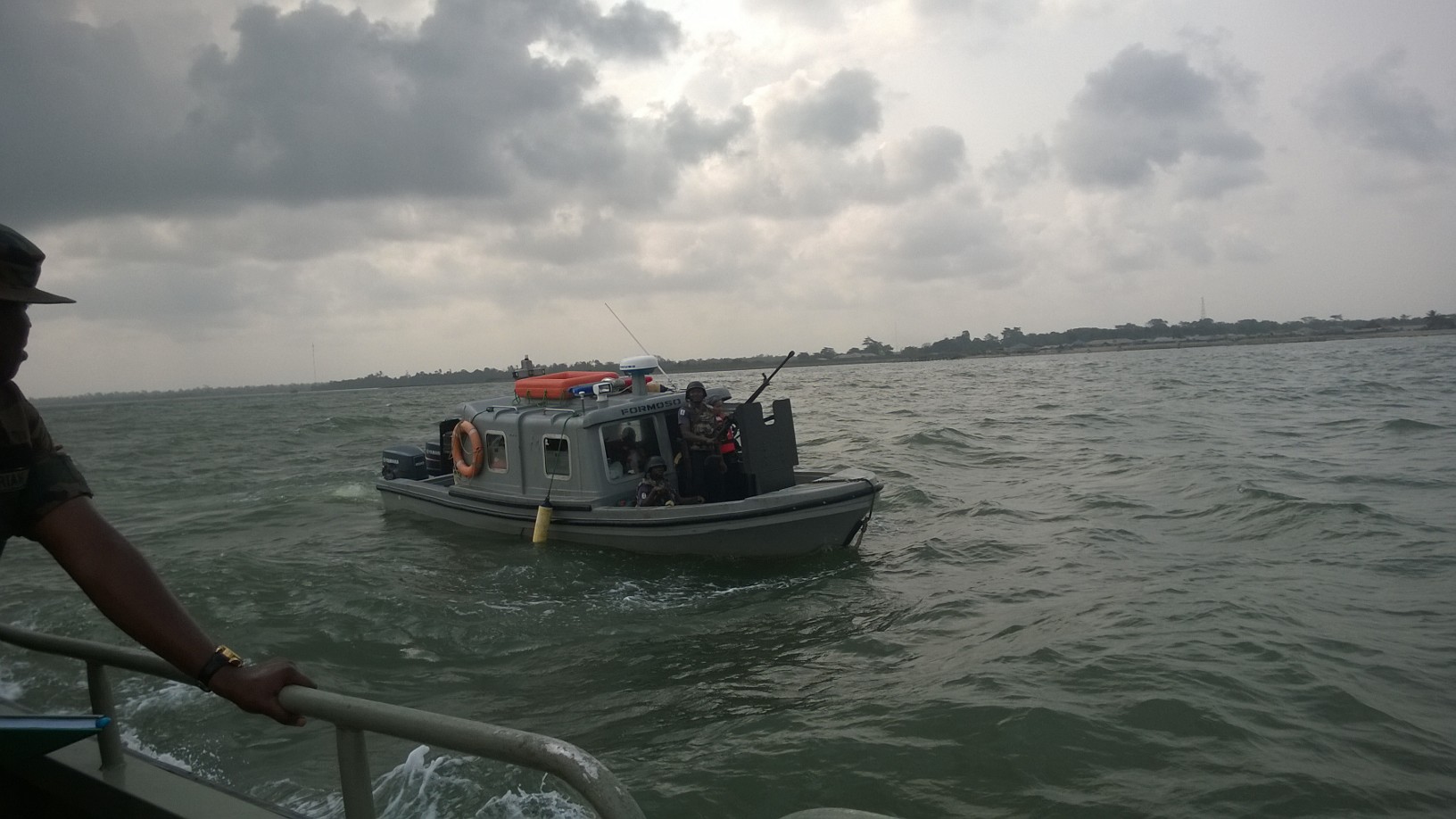 The trip to Forcados was all business. Forcados in Burutu Local Government Area of Delta State, Nigeria hosts the second oil export terminal in Nigeria besides the one at Bonny in Rivers State. There was no media announcement and no paparazzi. Government officials on the visit were John Nani – the Commissioner for Environment, Delta State and Dan Yingi – Chairman of the Environment Committee of the Delta State House of Assembly The other officials were Mrs Akutu -the Permanent Secretary in the Ministry  and  Idris Musa of the National Oil Spill Detection and Response Agency (NOSDRA). And then there were three of us from the environmental justice constituency: Emem Okon, Monday Itoghor and yours truly.
Arrival at Forcados Terminal was an hour’s bounce on the waves in a convoy of military boats. On the way we passed solitary boats with stoic fisher women and men hoping for a catch, and obviously at home with the boisterous waves around them.
On arrival at the Terminal, the visiting team was given a presentation on the incident by Shell officials. Before zeroing in on the incident, they went on a history tour of developments on the Terminal as well as on past incidents.
Spills remembered
The terminal commenced operations 1971, that is 45 years ago and had a major upgrade in 1998.
Shell noted that the incident of 14th February 2016 was almost on the 10th anniversary of an 18th February 2006 militant attack on the pipeline. They also mentioned an attack on their 36 inches produced water pipelines in 2006. Produced water is dumped into the creeks and rivers of the Niger Delta after treatment by the production companies.
The company provides constant electricity from gas turbines to the two major communities in Forcados, Ogulagha and Odimodi. Shell has 36 power generating turbines here and only needs 2 to power their operations at the Terminal. Since the shutdown power is supplied from diesel run electricity generators. This may soon be rationed as supply runs low.
Shell also informed that on 4th March 2014 there was a third party interference on their export line at a depth of 8 metres and that this was a through a sophisticated theft point that only professionals could have done.
The current spill happened 5km off the coast and led to a shut in of 300,000 barrels a day of crude oil from government owned Shell, Nigerian Petroleum Development Company (NPDC) and a Nigerian company, Seplat Petroleum Development Company.
Chronology of a Spill and Response 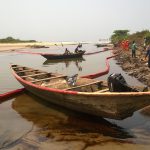 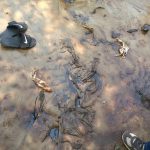 The loading of a vessel, MT Yamuna Spirit, commenced from 10:00 am on 12th February 2016. Loading was suspended at 0:20 am on 14th February when the spill was noticed. Seplat and NPDC were informed to stop pumping crude oil to the Terminal at 5:41 pm on 14th February.
Shell deployed booms at 9:35 am on 15th February to curtail the spread of the crude and a specialised surveillance aircraft arrived from Ghana at 10:30 am on 17th February to join the effort. By the time of the visit, they had deployed 27 skimmers and plastic tanks for collection of recovered crude. They also stated that community people were recruited to join the clean up effort.

There were booms and skimmers deployed by Shell here, but these were clearly rudimentary and ineffective. The crude oil simply coursed beyond the feeble booms while the skimmers whirled and skimmed what they could.

When the Minister asked what actions had been taken to protect and assist the impacted communities, Shell officials informed that so far they had recovered 25 barrels of crude and had mobilised relief materials such as rice, beans, vegetable oil and water to the major communities.
Tellingly, Shell would not disclose how many barrels of crude oil has been dumped into the sea, creeks and the lands from this incident.
Cause of Incident 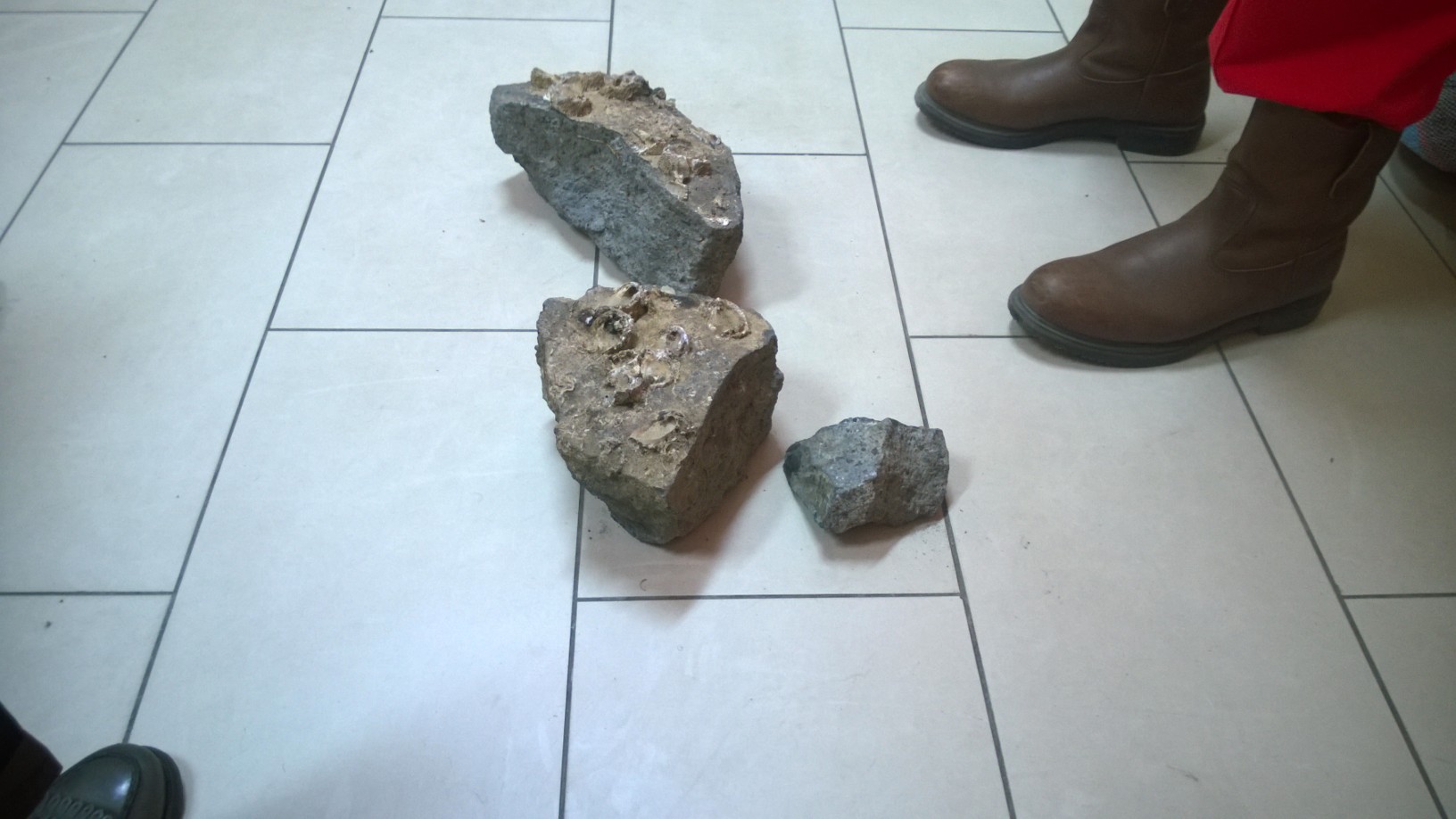 Although investigations by the Joint Inspection Team –made up of company and government officials, as well as community representatives- have not been concluded, Shell insisted that the spill was caused by a third party interference. How are they so sure of this? They displayed thick concrete pieces collected from the sea bed at the point of leakage. The pipe is protected by being encased in concrete reinforced with wire mesh. The second point that they claimed provided irrefutable proof was that some communities people informed them that they heard a big bang at a time that coincided with when the spill occurred.
On being questioned by the Minister of Environment, they agreed that they would have to wait for the conclusion of the investigations and further expert examination, before drawing any conclusions about the cause of the spill.
My note here was that even if the exact time of the rupture of the pipe was known, hearing a loud notice from the community could not rigidly prove that a third party interference had occurred on the pipeline at a point 5 km out at sea. That sounds like one “hearsay” taken too far!
The Minister of Environment appreciated the fact that Shell notified her ministry of the spill on 15th February. She told them that President Buhari is determined to ensure a clean up of Ogoniland as well as the entire Niger Delta. She noted that whether the present incident was caused by equipment failure or by third party action, the government was concerned that the communities, the environment and the economy should not suffer.
They Don’t Care if We Exist
[wpvideo U0J83VCv]
After the Official presentation it was time to visit some of the impacted communities. We headed towards the open sea, but after about 15 minutes in choppy waves and heavy salt water sprays, it was obvious that it was not the right time to proceed in that direction using the boats we had. So back to the Terminal we returned. From here we went to Oseigbene  village (also called Okutu) right at the edge of the Terminal to see things for ourselves.
Shell had tried to say that the spill was being contained and kept from hitting the shoreline, but the visit to this village showed very extensive crude oil pollution of the community, especially their creek, the major source of potable water. There were booms and skimmers deployed by Shell here, but these were clearly rudimentary and ineffective. The crude oil simply coursed beyond the feeble booms while the skimmers whirled and skimmed what they could.
The mangrove forests were heavily impacted. Dead crabs and fish littered the shoreline at the village. It was a river of oil as far as we could see. The effort to put up a clean-up show for the visiting Minister did not quite pan out as they may have expected.
Community women spoke up. The told the Minister that Shell does not appear to care whether they existed or not. That no one cared if they were humans. They had no road, no electricity and no water. They had no jobs and were not engaged in the clean up processes. They had also not received any relief materials. Their children were sick as a result of the spill and some were in hospitals receiving treatment. After the visit the oil company officials said they were not aware of any illnesses arising from the spill.
The Minister assured the community that her visit was to ensure that their situation was handled properly and that their environment would be cleaned up. She also noted that the women and children bore special impacts from incidents like the present one and that something would be done to assist them.
A short helicopter overflight of the spill point showed efforts being made to curtail the spread of the spill. Again the booms deployed out there did not appear to far any better than the ones seen at Oseigbene.
This is the story of oil and the Niger Delta.