The Bite of Biafra 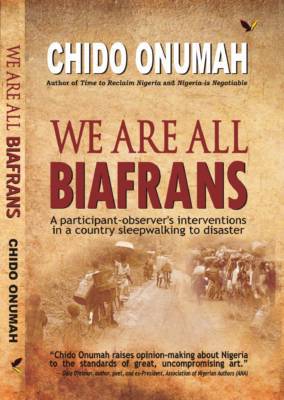 The Bite of Biafra*

The name, Biafra has been around as the name of a bight far longer than the brief moment during which Eastern Nigeria took it on. The Bight of Biafra is that part of the Gulf of Guinea renamed the Bight of Bonny by Nigeria in 1975, possibly in an effort to snuff Biafra out of memory. Some names simply stay stuck even after they may have been dropped officially. Many unyielding street names attest to this phenomenon also. It is a lesson of history.
Current contestations have pushed Biafra in our faces and we simply have to deal with it. Chido Onumah in the title article of his book, We Are All Biafrans admonishes, “while I believe Nigeria is negotiable, I do not think any attempt to negotiate Nigeria can and should be done solely on the basis of ethnic, religious or cultural affinity. That is my position on the Biafran issue.”[1] We agree with him. These cleavages cannot define who we are or under what political architecture we chose to live in.
Earlier in the chapter of the same book titled 2015: Why Buhari matters, Chido writes and I quote:
“The improvement of millions of our country men and women, the wanton abuse of rights, the unmitigated corruption, alienation, internal colonisation and exacerbation of the fault lines of the country, are not issues that the current political order can tackle.”[2]
These fault lines are not only socio-economic or political, they are also physical. They are pervasive and democratically distributed across the land.
Permit me to reiterate that we are indeed all Biafrans. Consider the forces of displacement that pushed some Nigerians into the geographical zone that took that name. Today, the forces may not be the same, but Nigerians are being displaced, marginalised and pushed into conflicts of various degrees of viciousness. There are enclaves of Biafra everywhere in Nigeria. You may not like the name, you may even change it, but Biafra sticks to us like our shadows.
Accepting the inevitability of our identity may well help us to find the glue that would hold us together, or give us the boldness to accept to live together in a state of flexibility. Rigidity often leads to collapse. And that is why forced codes of relationships cannot build trust, solidarity or cohesion. Our fractiousness and selfishness speak to this reality.
The dispossessed, the displaced and the marginalised are found all around us. They are voiceless and easy to overlook. Like vermin, they can be crushed underfoot.
Desertification threatens to swallow up the slim tracts that pass for the heritage of our compatriots. Water stress, including the shrinkage of Lake Chad to less than 10 per cent of the size it had at independence, displaces millions of herders and fisher folks. Toxic effluents from tanneries and sundry industrial outfits and wastes from power plants turn our rivers into adversaries.
The dispossessed, the displaced and the marginalised are found all around us. They are voiceless and easy to overlook. Like vermin, their lives count for little.
Gully erosion challenges the notion of Biafra. It also reinforces it. These huge gullies have literally become insatiable mouths that swallow everything in its path that does not scamper away on time. Farmlands, homesteads, sundry infrastructure disappearing before our eyes.
The dispossessed, the displaced and the marginalised are found all around us. They are voiceless and easy to overlook. Like vermin, they should be glad to have the earth provide them graves.
Some fellow countrymen and women think they can hide away under trees in thick forests, living with nature and communing with other species, our relatives. But we need superhighways with internet backbones; we need shopping malls and we need top notch hotels. Highways chalk up cheap political points for making first, second or third year anniversaries. So, deforestation defrocks forest communities. Who needs monkeys or chimps when we can make ourselves spectacles for the rich.
The dispossessed, the displaced and the marginalised are found all around us. The are voiceless and easy to overlook. What is the purchasing power of a forest dweller? What do they add to our GDP?
Coastal erosion and subsiding lands. Sea level rise. If the guns cannot silent dissent, these will swallow them up. Add unrelenting pollutions and infernal gas flares and we will soon be pumping fists of victory in the toxic air.

The dispossessed, the displaced and the marginalised are found all around us, and our challenges can be traced to similar roots. Games of power and reckless exploitation and accumulation. One powerful truth is that the oppressed in one are the same as the oppressed in the other. That defines our all being Biafrans. Being pressed into the borders called Nigeria, we ignore that pressure at our peril.
We could push ahead in fear or hate. We could also choose to sit together and deliberate on how to ease the shocks, overcome the odds, build love and solidarity and introduce some flexibility that considers the possibility of the bight in the Biafra in which all Biafrans live. It is a choice. Inaction may shut the bight but usher in the bite of Biafra.
————————-
*A reflection by Nnimmo Bassey on Chido Onumah’s We Are All Biafrans- A participant-Observer’s intervention in a country sleepwalking to disaster. The book was presented at Shehu Musa Yar’Arua Centre, Abuja, on 31 May 2016