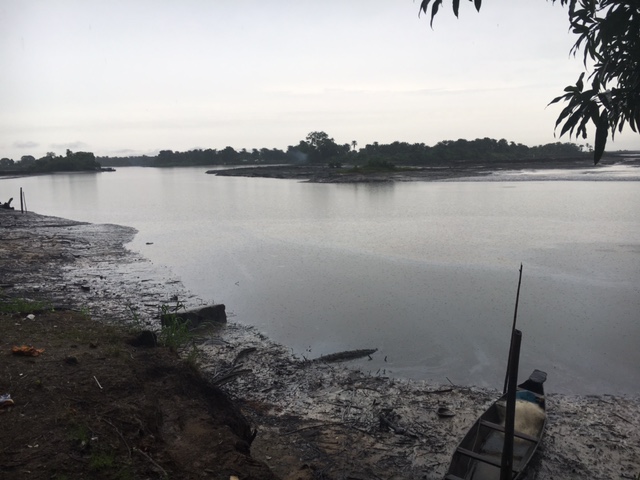 As the water gushed the smell of petroleum products filled the air. Indeed, one would be right to wonder if he was pumping up petrol. We asked to know what they use the water for. All sanitary needs. Plus, drinking at times. Mind boggling.

August 4, 2016 marks the 5th anniversary of the submission of the report of the assessment of the environment of Ogoniland to former President Jonathan by the United Nations Environment Programme (UNEP). The report etched for Nigeria and the world, the damning levels of hydrocarbon and other toxic pollutions in Ogoniland. The report more or less indicated that a state of environmental emergency should have been declared in Ogoniland. Nothing much happened, and each passing year, since the submission of the report, has witnessed more groaning and sighing by the people that have no option but to live in the horrendously polluted environment.
The first inkling of action by government was on the eve of the first anniversary of the UNEP report. That was on 24th July 2012 when the government hurriedly cobbled together what was known as the Hydrocarbons Pollution Restoration Project (HYPREP). The name was quite anachronistic, but it was aimed at calming nerves of locals who were getting impatient that a year was rolling by with nothing being done with the report that showed that they were living in an environment that was killing them. The first visible actions of HYPREP included the mounting of huge billboards in Port Harcourt denouncing oil theft and tampering with oil pipelines.
While this was going on, the people were drinking water that has been shown to be laced with hydrocarbon pollutants and at places with carcinogenic benzene. They are still drinking such water. On 26th July 2016, after a monitoring training of a team of Ecological Defenders of Health of Mother Earth Foundation (HOMEF) we decided to visit one of the community leaders at Ogale, Nchia-Eleme, Ogoni. Our host turned on his electricity generator and pumped water up from a borehole he had sunk. As the water gushed the smell of petroleum products filled the air. Indeed, one would be right to wonder if he was pumping up petrol. We asked to know what they use the water for. All sanitary needs. Plus, drinking at times. Mind boggling.
Another sign that the recommendations of the UNEP report have been seen by HYPREP is the ubiquitous sign posts in Ogoniland erected at polluted creeks, streams, rivers and boreholes. They all warn citizens not to drink, fish or swim in the contaminated water. Besides the water trucked in by the Rivers State government at that time, the people have largely been left to cater for themselves as best as they can, or to wallow in the toxic waters.
A meeting of rotten oil facilities, oil spills, third party interferences and oil theft give the best example of how to brew environmental disaster. Visits to Bodo, K-Dere, B-Dere, Ogale, Goi and other polluted in Ogoniland literally leaves one breathless. And angry.
Efforts to commence the clean up of Ogoniland took a more determined turn under the current leadership of the Ministry of Environment. To begin with, HYPREP was decoupled from the Ministry of Petroleum Resources, a ministry deeply complicit in the polluting of Ogoniland and the rest of the Niger Delta. The project is now domiciled in the Ministry of Environment which should provide a more credible platform for the tasks that need to be done.
The ceremonial flag off of the clean up of Ogoniland (with expected expansion to other highly polluted parts of the larger Niger Delta in mind) took place on 2nd June 2016 at the Numuu Tekuru Waterside, Bodo. Several questions have trailed the ceremonial flag off. Is the government sincere about the exercise? Is there a budget for the clean up? When would the structures to oversee the clean up be set up? What roles would local people play in the exercise? Will this be another avenue for dispensing political patronage?
One of the best responses to the situation has come by way of a briefing prepared by Social Action, titled Cleaning in a Vacuum: Framework Gaps in the Implementation of the UNEP report on Ogoniland (July 2016). The Briefing pointed out among other things that HYPREP did not receive the approval of community and civil society groups because what UNEP recommended was the creation of an Ogoniland Environmental Restoration Authority whereas HYPREP had a mandate that covered the entire Niger Delta. The embedding of HYPREP in the Ministry of Petroleum Resources did also not gone well with many. Same with the lack of transparency in the operations of HYPREP. Social Action believes that HYPREP would face serious hiccups unless it has an enabling legislation establishing it, especially because the clean up will be a long drawn process transcending many administrations. The group, and other stakeholders, would also like to see a clear roadmap for the planned clean-up.
Some of the issues flagged by Social Action also emerged at the HOMEF training of 26th July 2016 and we quote:

As yet another anniversary comes, we note that the much vexed issues of reviewing the structure of HYPREP and the setting up of the structures for the clean up have been done. We hope that Ogoni will one day breathe fresh air again.