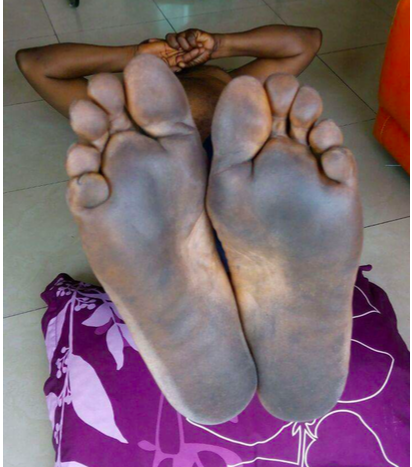 Dark clouds over Port Harcourt. The air in parts of Port Harcourt has been darkened by soot over the past few months, raising a cloud of concerns about the attendant health impacts. Citizens in parts of Port Harcourt, Nigeria, are getting worried about the air they breathe. To put it another way, many citizens are afraid to breathe. And that can be deadly.
Soot is a general term that covers pollutants derived from incomplete or inefficient burning of fossil fuels or biomass (plants or plant-based materials used as source of energy). The major sources of soot include fuels like diesel used in transport and in electricity generators. For the Niger Delta, the sources include the aforementioned and include others such as: gas flares, illegal refineries, the burning of illegal refineries and crude oil, burning of oil spills by incompetent contractors and the burning of sundry wastes. Bush burning can also be a source of soot in our environment.
The burning of illegal, or bush refineries, by the Join Military Task Force (JTF), the incendiary acts that have been raised as banners of victory over oil theft, is one source that must be halted immediately. The bush refineries are basic and flimsy contraptions that can easily be dismantled and safely disposed of. The same goes for wooden barges arrested with stolen crude. Dropping grenades on those toxic wares and sending smoke signals above the creeks may be seen as acts of bravado, but they have serious health impacts on the environment and citizens in the area. The JTF, working with the Nigerian National Petroleum Corporation (NNPC) and the oil majors, should set up recovery centres were recovered stolen crude are logged, stored and safely disposed of by the original owners or as agreed. The disposal methods could include sending such crude to the refineries or by exporting them if the quality is not compromised by the process of rough handling.
A variety of soot is one called black carbon. We have also heard of black snow arising from carbon particulates that accumulated in the Himalayas, for instance, and is said to aid the rapid melting of snow by reason of the heat they trap. Dramatic carbon pollution in the winter of 1952 led to the death of about 4000 persons within five days.
The current situation of soot blanketing the skyline of parts of Port Harcourt is deeply troubling and requires urgent actions from relevant government agencies as well as research institutes. In particular, the National Environmental Standards and Regulations Enforcement Agency (NESREA), Nigerian National Oil Spill Detection and Response Agency (NOSDRA), Directorate of Petroleum Resources (DPR) and, in general, the Federal and State Ministries of Environment and those of Health should step up to tackle the emergency situation.
When reports of gathering soot came up a couple of months ago, sources at NESREA confirmed that the soot originated from hydrocarbon or oil-sector related sources. That conclusion rules out bush burning as a possible source. For those that have noticed the thick black smoke belching continuously from the Port Harcourt refineries, those sources are very strong suspects. And then, the bush refineries and the bombing of those rickety refineries by the JTF remain strong contenders. These should all be investigated. The scenario has raised the urgent need for air quality measurement and control in Nigeria. Within accurate measurement of levels of exposure, causal links may not solid and culprits may wriggle out and avoid accountability and responsibility.
It is the duty of our regulatory agencies to pin-point the source of this menace, enforce a cessation of the obnoxious acts and penalise the culprits. We know that the conflicting boundary lines governing the duties of these agencies may complicate the processes for addressing this issue, but joint meetings should overcome territorial defences in the face of the risks our people are exposed to.
This is a serious situation and government cannot afford to remain silent on it. The health impacts of soot and black carbon are well documented and are known to include effects on our respiratory system and bloodstreams. They can trigger cardiovascular diseases such as asthma, chronic cough, sinusitis, bronchitis and colds. The fine particles can also have carcinogenic effects. They can also negatively affect the development of the lungs in children. Life expectancy in the Niger Delta is already precariously low, the effect of soot and black carbon will push those low figures through the bottom.
We should also mention here that Ekpan community at Warri, Delta State, has been suffering extensive pollutions from black carbon emanating from the petrochemical plant located there. The community is more or less heavily coated with soot continually and residents often have to keep their windows shut in futile to keep out the deadly stuff. When the community petitioned the National Assembly over the situation, an order was issued that the plant should be shut down until it was adequately serviced and fitted with devices that would halt the noxious emissions. It does not appear that the order was adhered to as the community is still reeling under the weight of black carbon whenever the machines come alive.
Residents of Port Harcourt, Ekpan and the Niger Delta as a whole deserve a breath of air that is fresh and devoid of soot and black carbon.