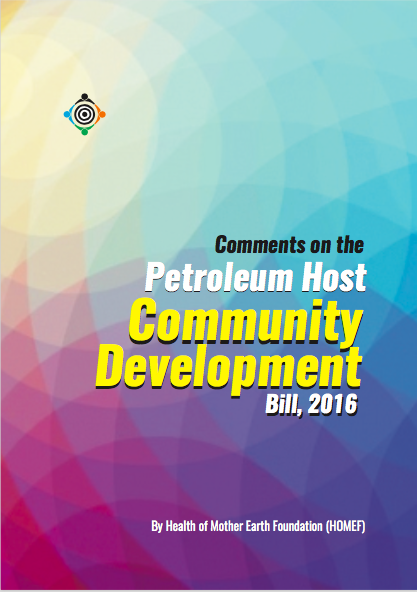 The premise of the Petroleum Host Community Development Bill, 2016, is the pursuit of development of Petroleum “Host Communities” using the vehicle of the Petroleum Community Trust. The Bill ignores the fact that a community does not have to host petroleum companies or their facilities before they are exposed to the negative impacts that accompany the actions of the sector, for example, black soot was observed in some parts of Port Harcourt in 2016 and early 2017 far from the pollution sites. The 1998 offshore Idoho oil spill that started from Akwa Ibom spread as far as some coastal areas in Lagos. Goi community in Gokana Local Government area of Rivers State has no oil installations or pipelines but was heavily polluted by an oil spill in 2005 that has rendered many community people homeless till date and with all their sources of livelihood lost. It cannot be denied that communities that do not fall into what this Bill refers to as Petroleum Host Communities do indeed get impacted as petroleum pollution does not respect community boundaries, especially in riverine areas where water bodies and swamps impacted by oil pollution are interconnected.
Secondly, by focusing mostly on financial contribution/distribution, the Bill overlooks the critical component of prior informed consent with regard to petroleum prospecting and exploitation in the affected communities. The only manner by which this is implied is in terms of “Community Development Agreements.”
Thirdly, a Bill of this nature would benefit from robust community engagements and consultations. This does not appear to have been the case with this Bill. That step cannot be ignored and should be urgently embarked on before any further consideration of the Bill. Having a public hearing in Abuja would not be sufficient if this is truly aimed at meeting the yearnings of communities.
Civil society groups including Spaces4Change, Social Action, Kabetkache and HOMEF met recently in Port Harcourt to review the Petroleum Host Communities Bill 2016. We share  HOMEF’s Comments on Petroleum Host Communities Bill 2016.