After the Massive Climate Marches 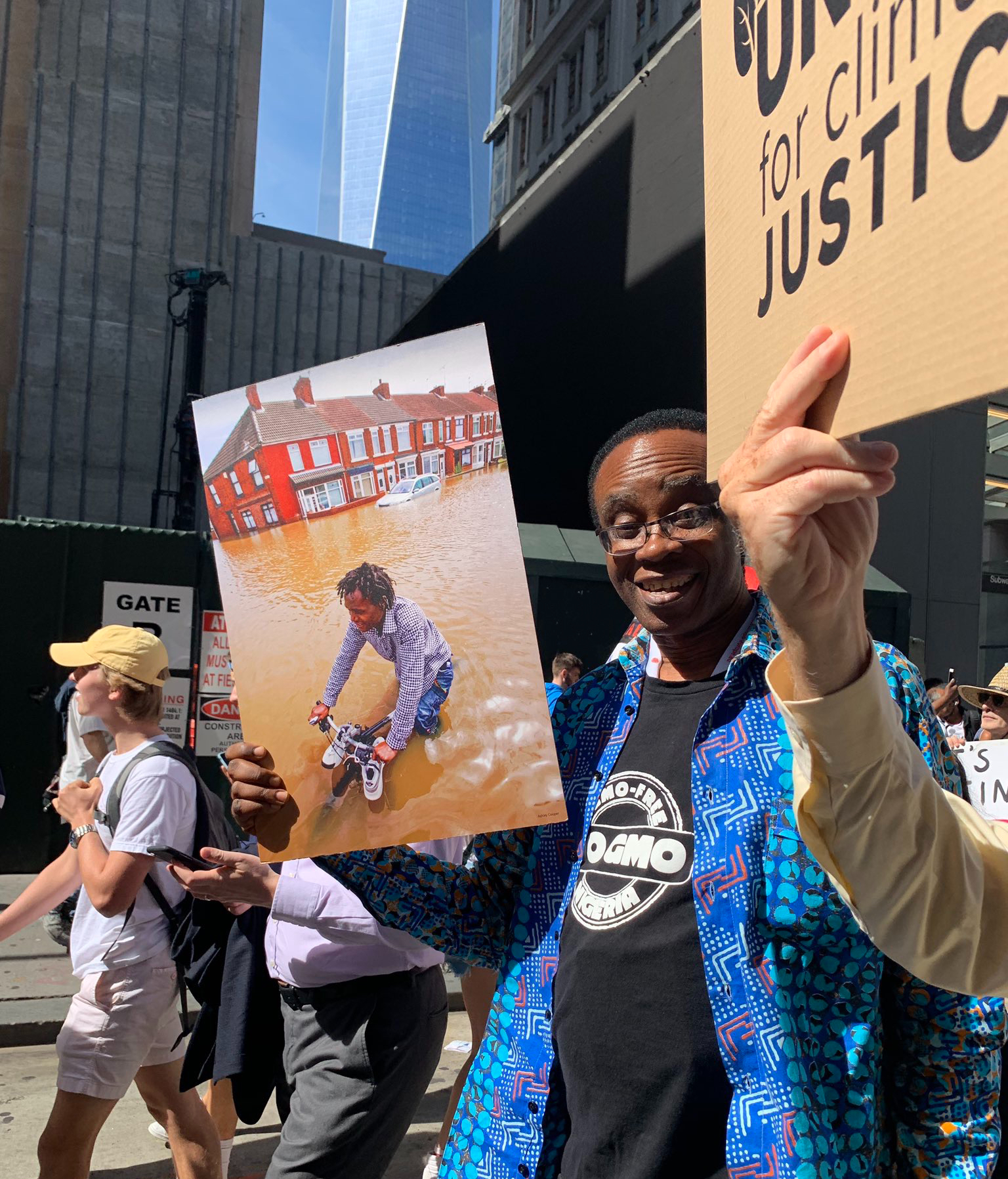 The massive climate marches of 20th September 2019 demand massive global actions. Extreme storms, hurricanes and cyclones are occurring so frequently that they are almost taken for granted. Recently The Bahamas and parts of the USA were hit by hurricane Dorian. Earlier in the year it was cyclone Idai,followed by Kenneth and then Fani in the Indian Ocean. Those cyclones battered Mozambique, Malawi, Zimbabwe, Madagascar, Seychelles and parts of the coastal areas of eastern India. Scientists surmised that the cyclones that killed over a thousand  in Mozambique and wreaked $2 billion worth of damage there was made more intense by the warming of the ocean.
In 2000 flooding in Mozambique caused extensive damage and pictures of disparate citizens stranded on rooftops, tree tops and broken bridges made the rounds in the global media. In 2012 flooding  in Nigeria took the lives of 363 persons and displaced 2.1 others. Last year over 100 persons died in floods in the country. All these come as go as news and the numbers of persons killed and properties damaged all go down as mere statistics.
While the dusts were yet to settle, we were alerted  of another storm hitting the Bahamas  and an headline informing that the Nigeria Hydrological Services Agency (NIHSA) predicted weather related destruction in parts of Nigeria by October as flood marches down from the upper reaches of the Niger Basin comprising Guinea, Mali, Niger, Burkina Faso, Cote d’ivoire, Benin, Chad and Cameroon arrive there. The floods are coming and we have a month’s notice to relocate to higher grounds. Storms in Guinea and other upstream nations will pile up the flood that will quietly wiggle its way down the River Niger and take unsuspecting communities downstream by surprise. But, are they not forewarned?

So, we did march in the climate strikes across the world. As massive as the marches were they did not stop the storms, cyclones, hurricanes from continuing to batter our peoples and territories.. Now is the time to build on the marches to compel action, halt dithering by policy makers and insist that speeches must never offset or take the place of action.

Were we not all forewarned in 2018 by the Intergovernmental Panel on Climate Change (IPCC) that we have barely twelve years within which to take real climate action to avert catastrophic climate crisis? What have we done to show that we understand the enormity of the looming dire situation? Precious little is being done or planned to be done. Countries are still struggling to make any serious commitments in the so-called Nationally Determined Contributions as required by the Paris Agreement. It has long been known that the climate crisis requires holistic approaches with nations assigned amounts of emissions to cut as determined and required by sciences and according to historical and current responsibility.
Unfortunately, the climate negotiations have become arena for nations  to agree on what is convenient for them to do or not to do, completely ignoring the climate debt and the fact that rich, industrialized, polluting nations have already grabbed 80 percent of the carbon budget. We are seeing the burden of climate action being loaded on poor, vulnerable  nations and territories that never contributed significantly to the stock of greenhouse gases in the atmosphere. These poor countries are required to turn their forests and soils and seas  into carbon sinks so that polluters can continue with pollution-as-usual in the name of business.
Did you hear of the legislation in the Philipinnesrequiring that students must plant ten trees or they would not graduate from college? While planting trees is a great idea, hanging this on a student’s graduation is another manifestation of injustice in the distribution of climate responsibilities.
This manner of intergenerational buck passing is unacceptable and confirms why radical actions must be taken to force governments to take up their responsibilities. The spokesperson of the African Group at the COP at Copenhagen in 2009 wept when nations were pushing for a climate ambition of 1 degree Celsius above preindustrial levels. He declared the target as unjust and would mean the incineration of Africa. With unchecked burning of fossil fuels and rising consumption and wastage, that 1 degree threshold has been crossed and today we pathetically celebrate a target of “1.5 or well below 2 degrees.”
In his The Complete Idiot’s Guide to Global Warming, Michael Tennesen states that if all the ice sheets on earth were to melt  we would have a sea level rise of approximately 60 metres or 200 feet. If that were to happen, only a few would find higher ground to relocate to. In fact, in some low lying coastal areas, a sea level rise of 1 metre or 3 feet would translate to the submergence of land to a distance of several kilometres into the hinterland.
The polar ice caps and all the ice sheets may not yet be cracking and collapsing into the sea at this time, but we have the warming that the scene is set for that to happen. Will nations heed the warmings we have today and take needed actions? Is the world ready to leave fossil fuels in the ground and ensure a rapid transition to renewable energy sources?
We are happy that the Climate Strike has caught the attention of the world. We salute the youths for showing disgust at the slumber of adults and policy makers while the climate crisis unfolds.
We can have conferences and mount shows to give the impression that something is being done to avert climate chaos. However, they will not stop the floods. This is no time for make believe. This is no tome for pretense. This is time to remind policy makers and polluters that the solution to the crisis are known and time for talks is over. Now is the time to accept that climate change is the result of the failure of markets and the social alignments engendered by them. Now is the time for action. Keep the fossils in the ground. Halt the burning of forests, especially in the Amazon. Halt all the false solutions. Embrace renewable energy. Embrace agroecological food production. Stop the weakening of national resilience through warfare. It is time for the payment of ecological and climate debt, not scrapping around for elusive Green Climate Finance. Respect the rights of Nature and all beings.
So, we did march in the climate strikes across the world. As massive as the marches were they did not stop the storms, cyclones, hurricanes from continuing to batter our peoples and territories.. Now is the time to build on the marches to compel action, halt dithering by policy makers and insist that speeches must never offset or take the place of action.